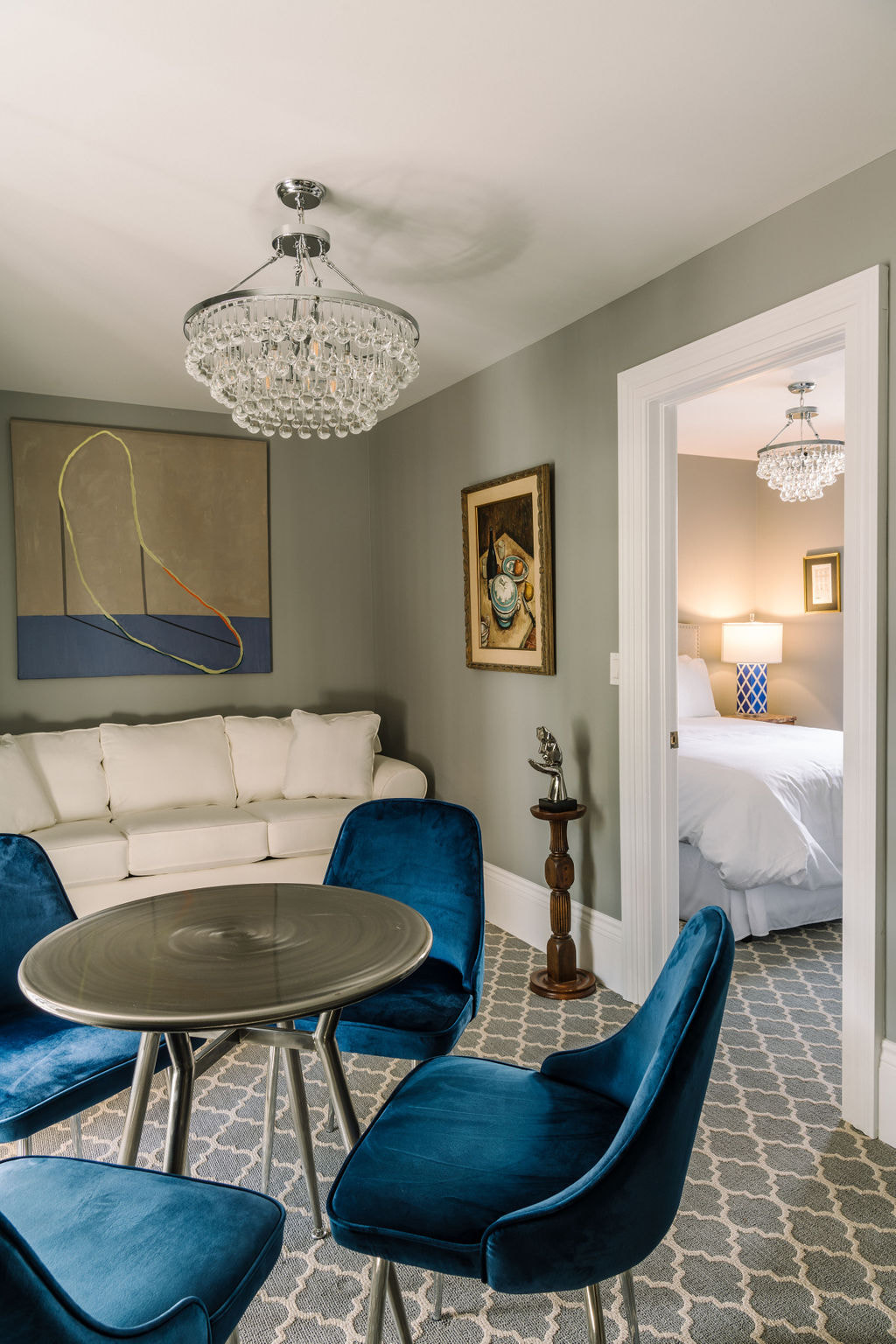 The Loyalist Suite
United Empire Loyalists settled Prince Edward County nearly 250 years ago and ancestors of both Merrill House's first owner, Edwards Merrill, and the house's current owner, Jordan Martin de Rosales, were among them. A nod to the importance of heritage, this suite features a separate sitting and dining room with contemporary interiors set on the garden. Sleeps four with a queen bed and queen sofa bed in separate rooms. 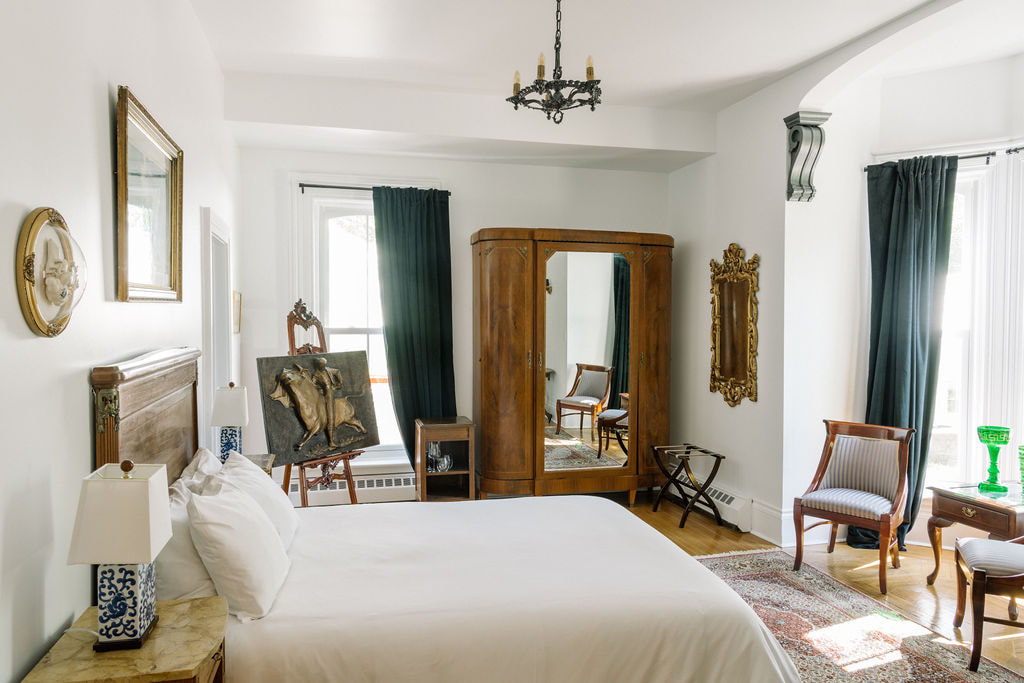 The Marchioness of Lorne Suite
The grandness of Merrill House's glory days is represented in fine antiques and formality. Originally a dining room, is named after the Princess Louise, daughter of Queen Victoria. Princess Louise's husband, the Marquis of Lorne, was appointed Governor-General of Canada in 1878, the year Merrill House was built. The suite features original parquet floors and an 1880 ionic fireplace with views of Picton's historic Main Street East. ​Sleeps two with a queen bed. 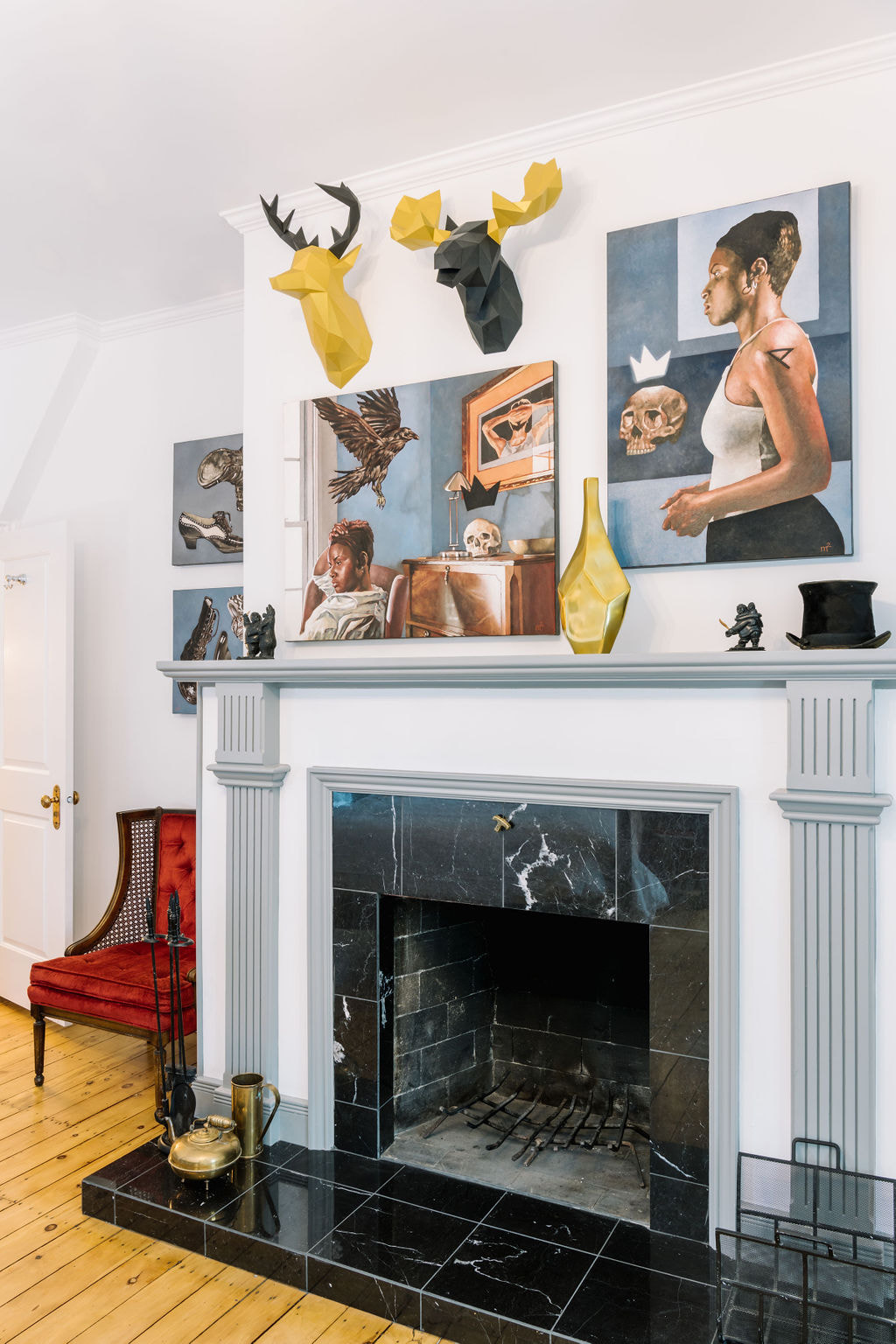 The Dreaming Suite
This suite was originally Edwards and Carolyn Merrill's bedroom; the house's master bedroom. It features a wood-burning marble fireplace, original floors, surrealist and realist paintings, African and European artefacts, and a four-poster bed with Main Street East and garden views. ​Sleeps four with a queen bed and queen sofa bed. 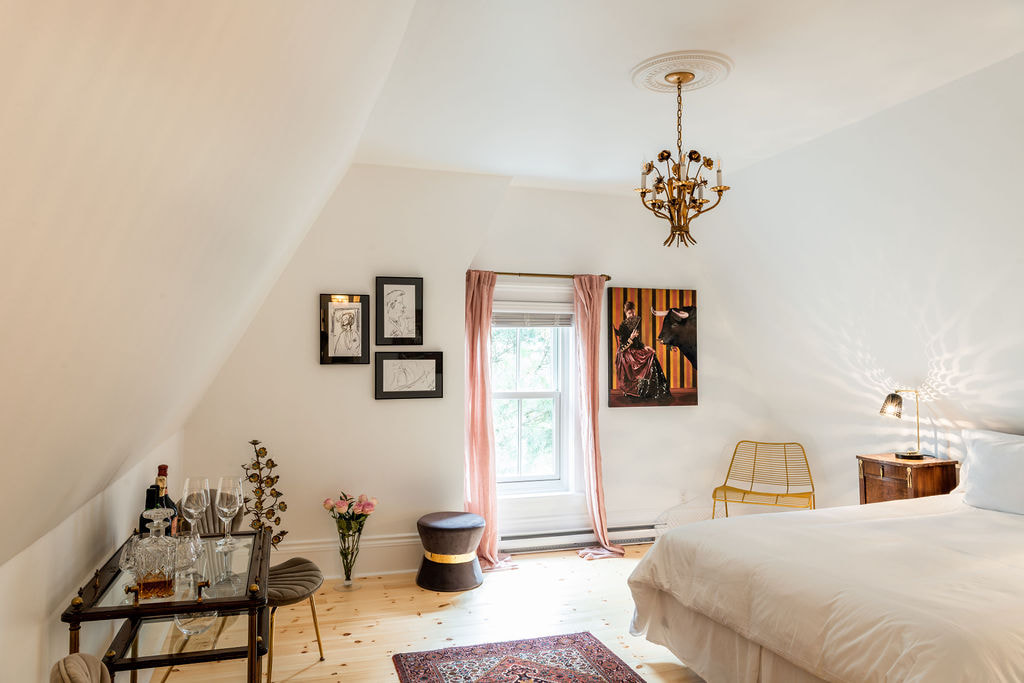 The Tower Suite
Located on the third floor, this suite features private access to Merrill's famed leaning tower that has been converted into a marble Jacuzzi Chamber. The suite is inspired by Gustav Klimt with views of the tree-tops. Sleeps two with a queen bed. 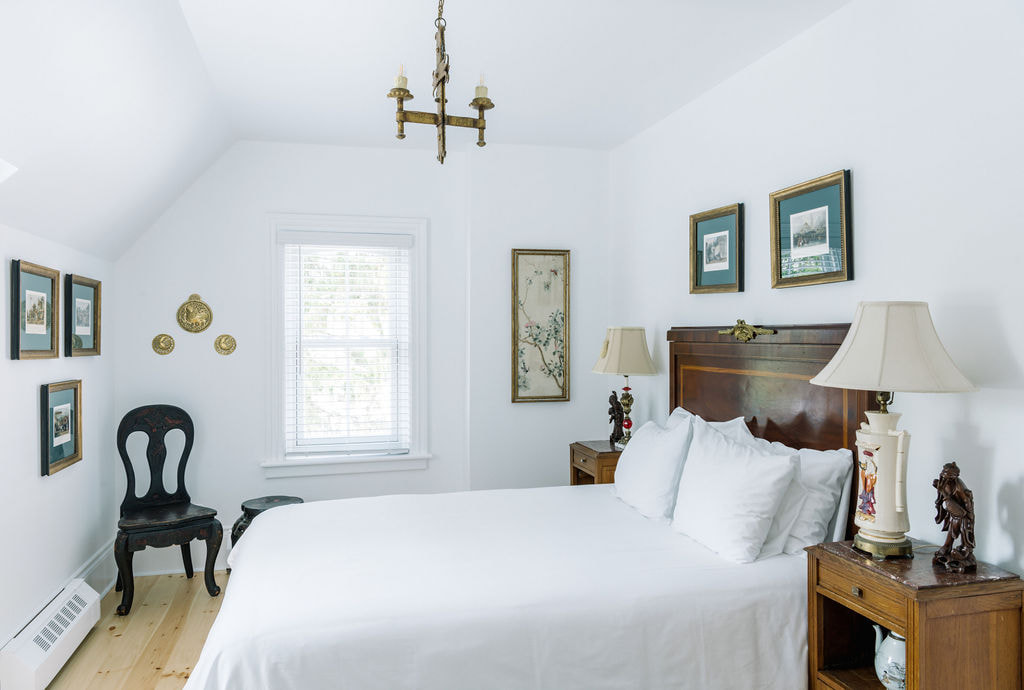 The Eastern Room
Featuring a spacious private balcony as well as antiques and artefacts from Istanbul (Constantinople) to Tokyo (Edo) with sweeping garden views. ​Sleeps two with a queen bed. 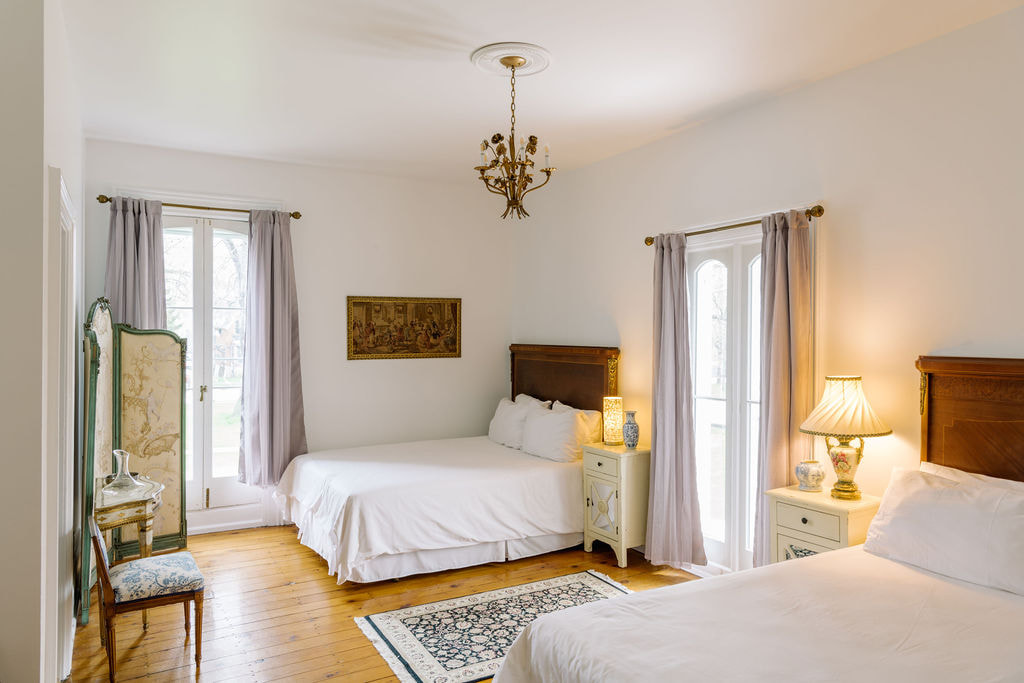 The Parisian Room
Originally the bedroom of the Merrill sisters, this room is all about chinoiserie, toile de Jouy, florals and other pretty things. It features original floors and sweeping views of Picton's historic Main Street East. ​Sleeps four with two queen beds. 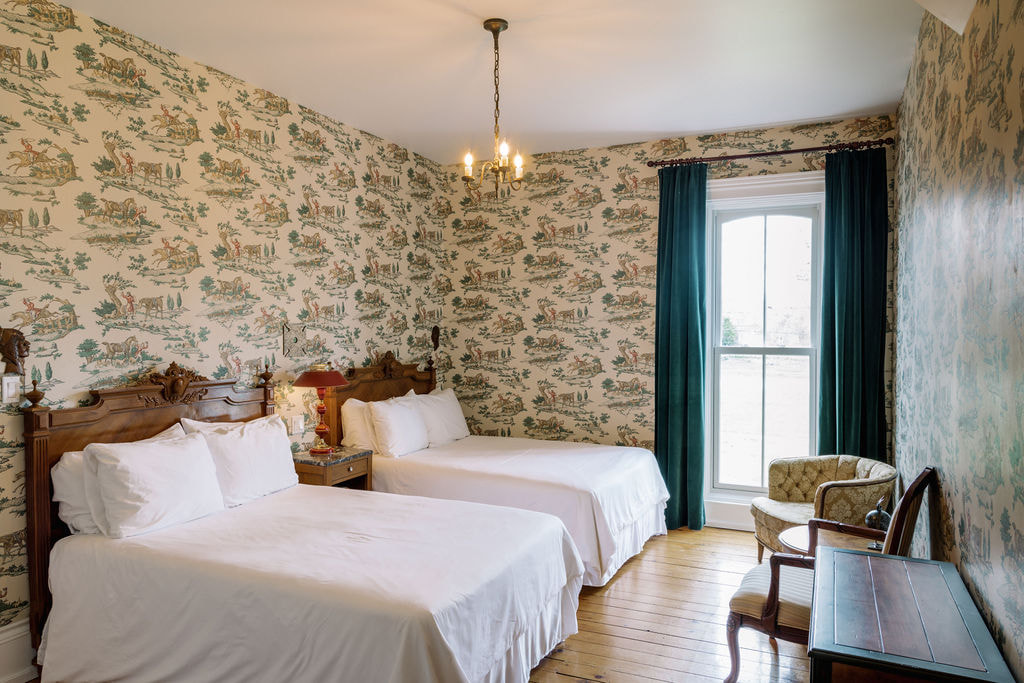 The Victorian Room
Originally the bedroom of the Merrill son, this room was the only one that retained its wallpaper through Merrill's massive restoration project. It is classically appointed with Victorian antiques and has views of Picton's historic Main Street East.
Sleeps four with two double beds. 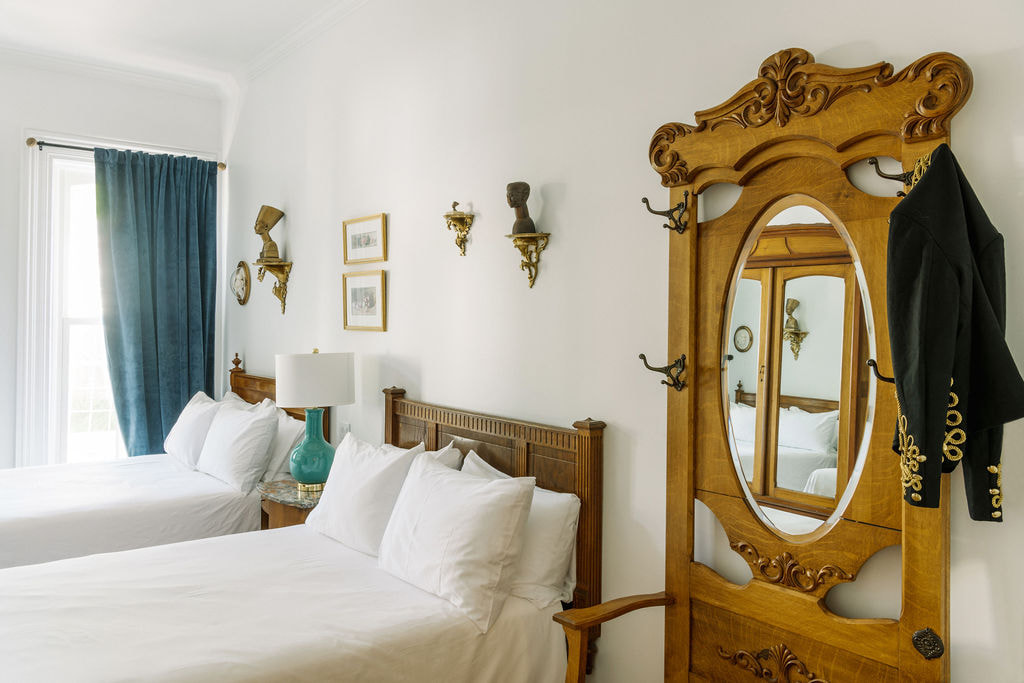 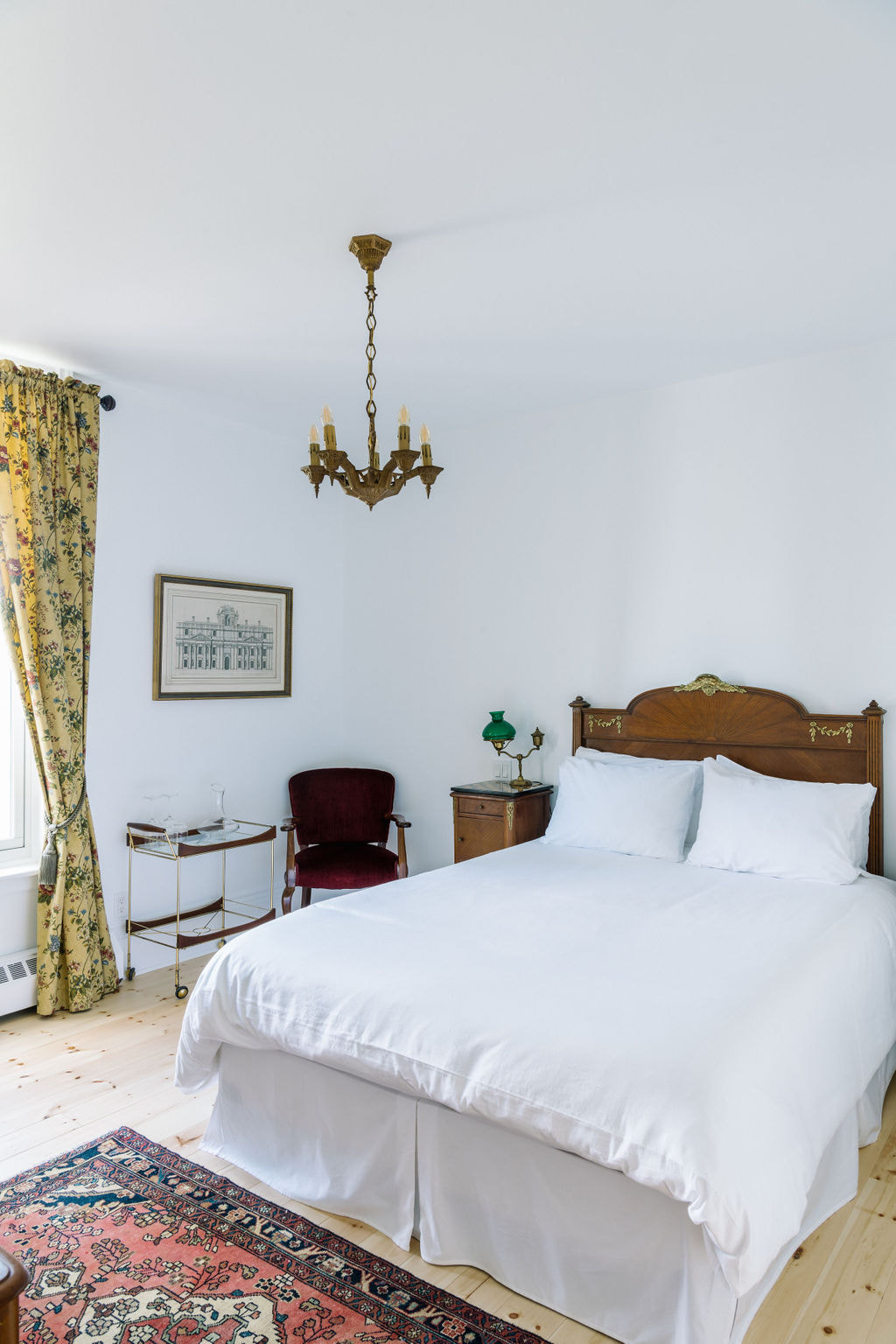 The Lithograph Gallery
Appointed with 1860s chromolithographs from the Great Exhibition of Industrial Art and Sculpture in London with views of the great Ross House. ​Sleeps two with a queen bed. 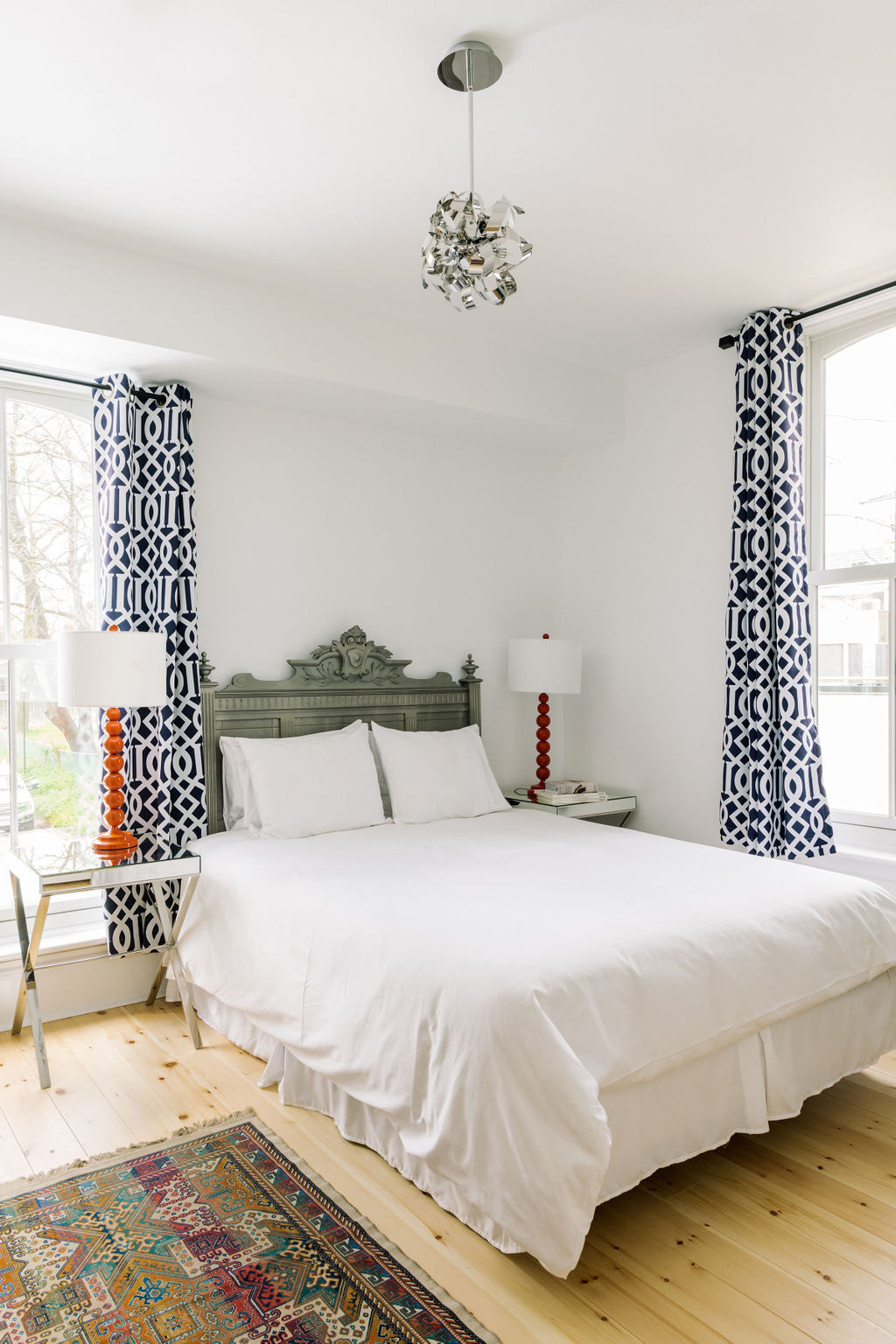 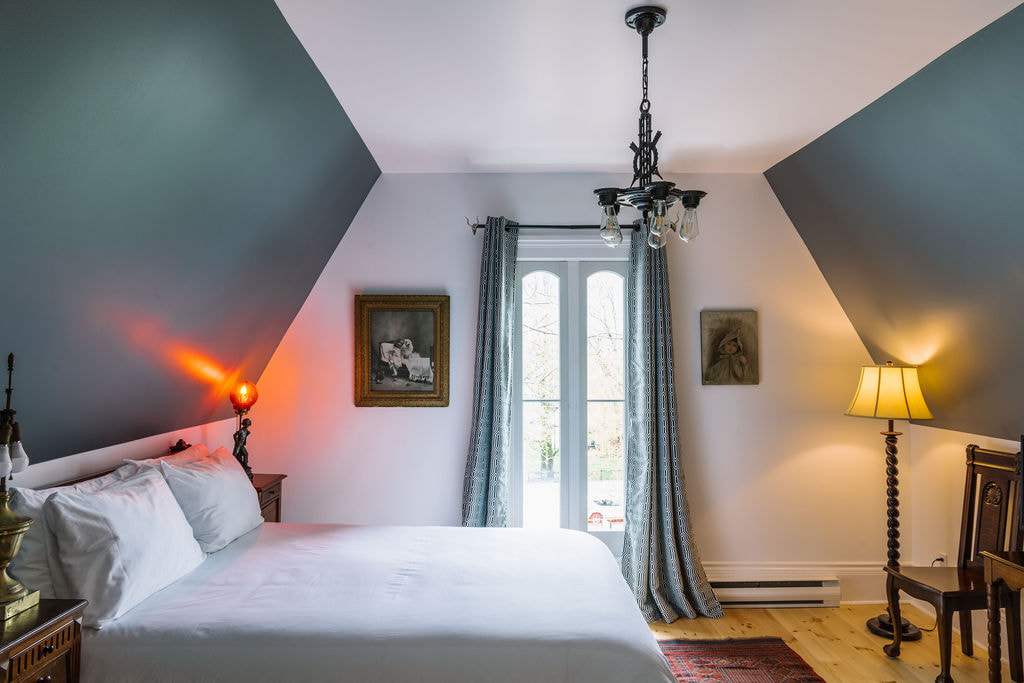 The Haunted Room
Perched in the old servants' quarters on the third floor, the dark Victorian is meant to overcome you in this themed room with sweeping views of Picton's historic Main Street East. ​Sleeps two with a queen bed. 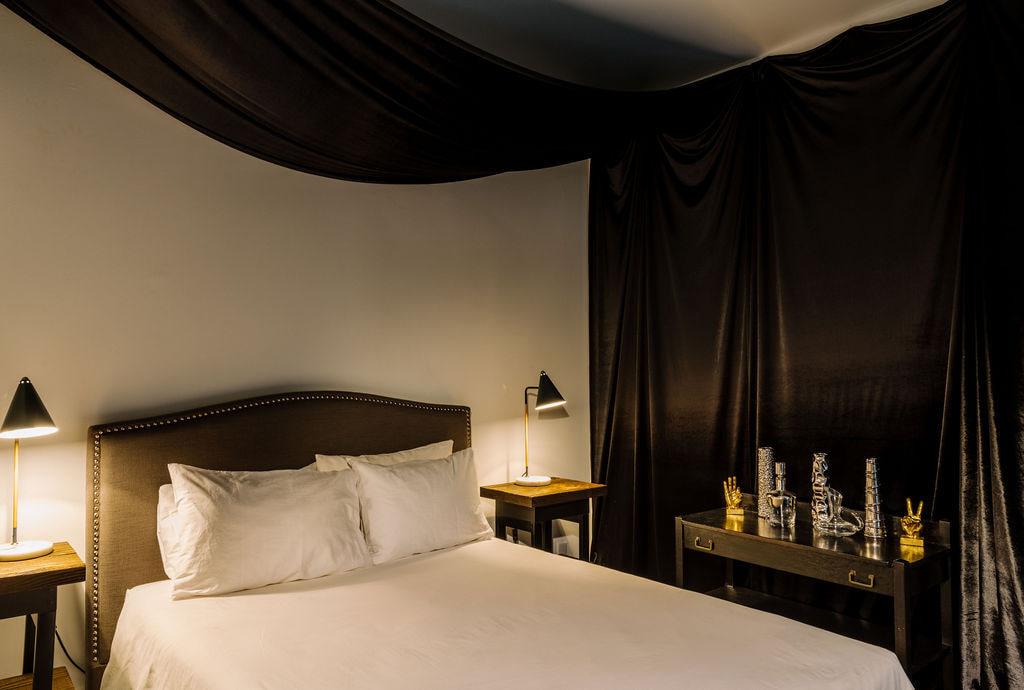 The Velvet Room
Sumptuous darkness is created with a velvet-cover wall that ​pulls back to reveal views of the great Ross House.
​Sleeps two with a queen bed. 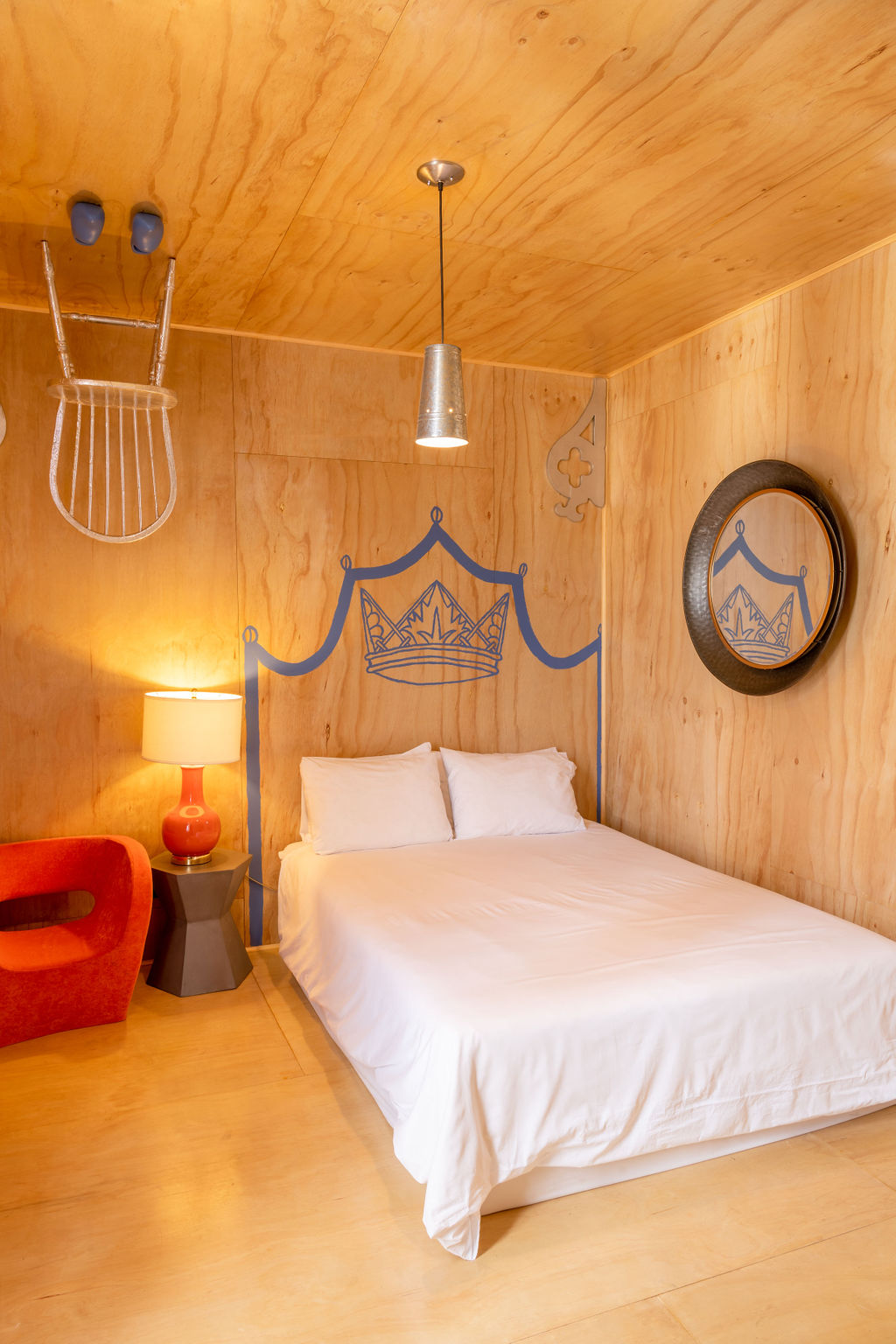 The Future Room
Ever evolving, every year Merrill House reimagines what the interiors of the future will look like whilst retaining the Swede-inspired wooden box with views of the great Ross House. Sleeps two plus the invisible man. There is a queen bed and he sleeps in his chair.
All bedrooms are equipped with:
Fine, French linens
A variety of pillow options
A smart television with Alexa, Netflix and Amazon Video
An iPad with a room service application
A mini library
​A decanter and glasses 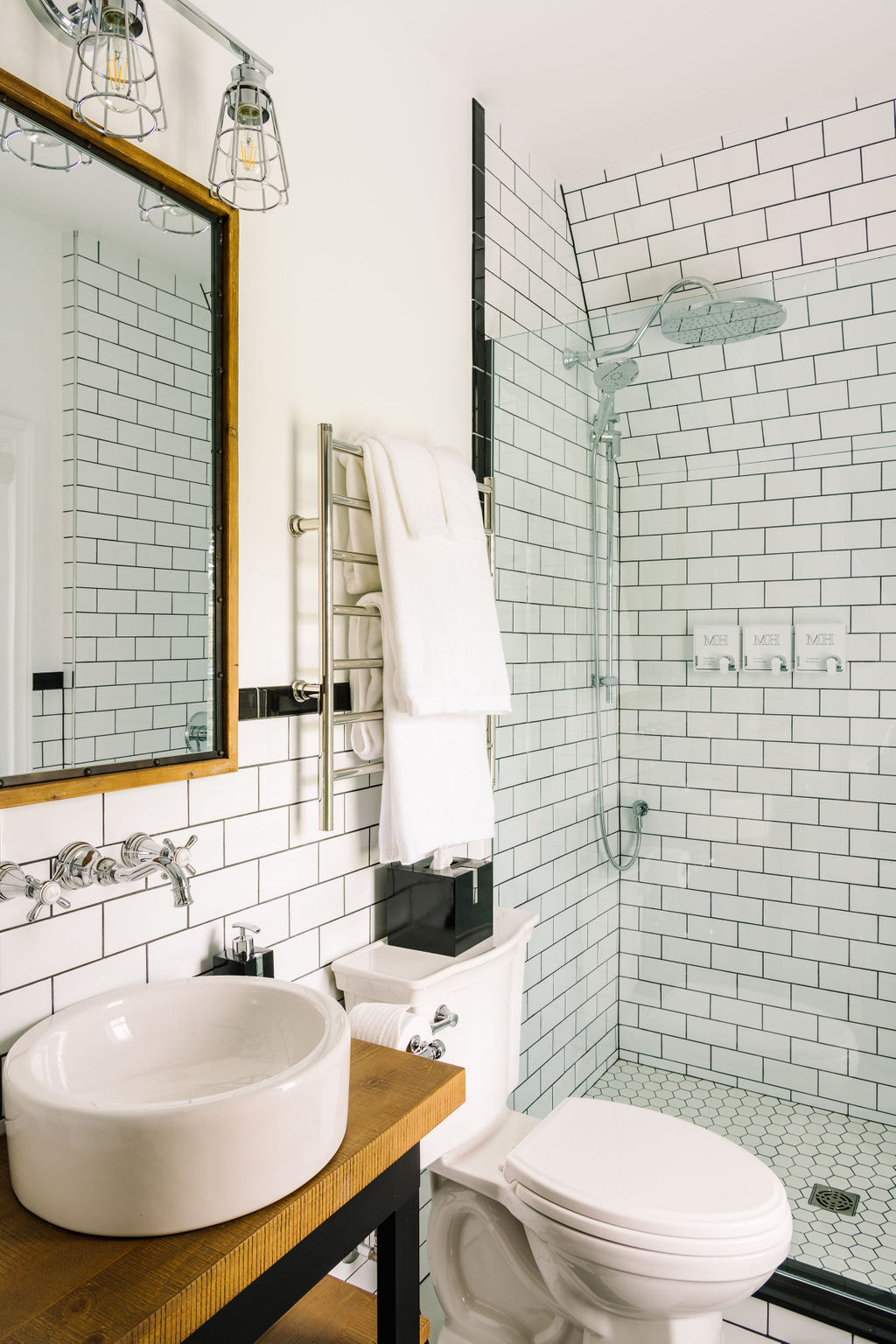 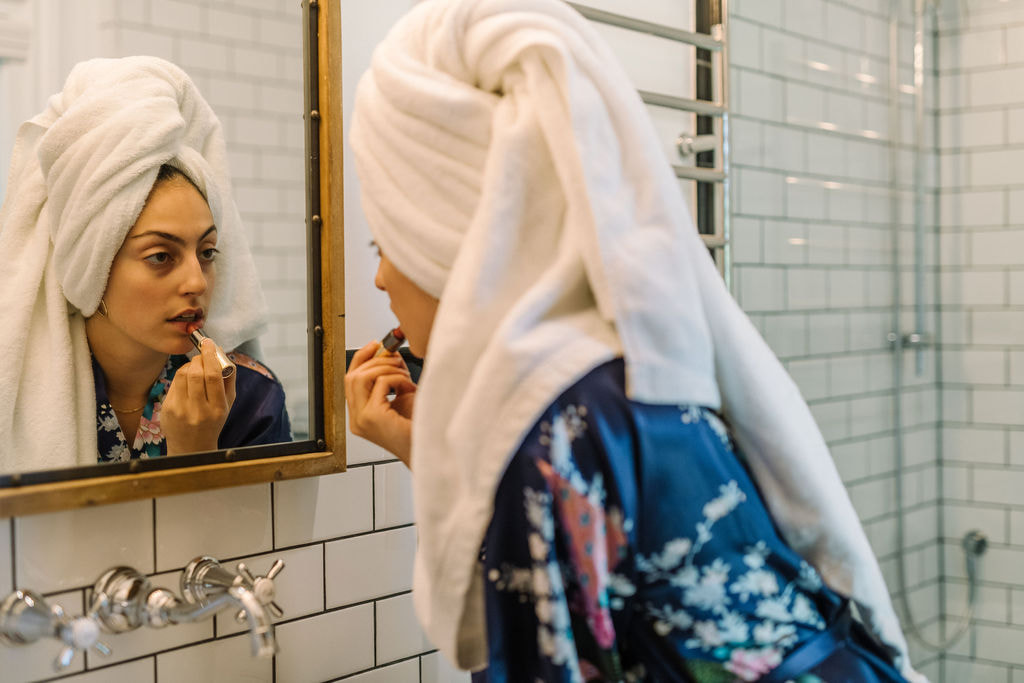