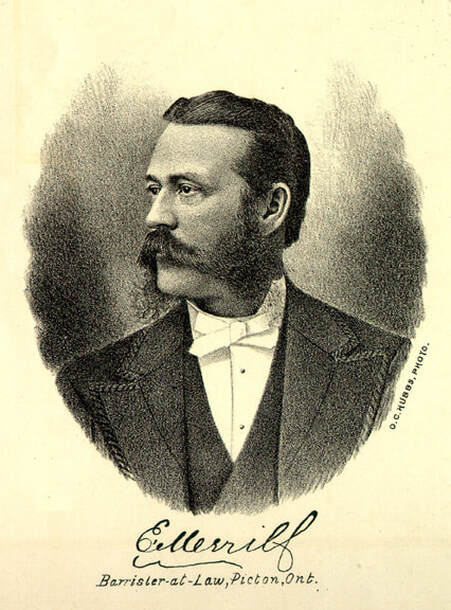 Of mixed English and Huguenot extraction, the Merrill family's coat-of-arms features a fleur-de-lis on its shield. The family landed in America in 1633 and was one of the founders of Newburyport. The family’s Canadian chapter began with Edwards Merrill’s grandfather, Samuel Merrill Senior. Samuel Senior emigrated from Connecticut to Upper Canada at the end of the 18th century where he established himself as a successful merchant. Samuel Senior’s eldest son, Samuel Junior, was born in Kingston in 1800.

Samuel Merrill Junior studied law in the office of the Honourable C. A. Hagerman, then of Kingston, and later a Chief Justice of Upper Canada. Samuel Junior was called to the bar in 1823 and subsequently became the first lawyer in Picton where he practised for nearly half a century. In that time, Samuel Junior established an exceedingly large and lucrative practice and a reputation as one of the best lawyers in the whole of the old Midland and Bay of Quinte districts. He was the first Registrar of the Surrogate Court in Prince Edward as well as Master-in-Chancery. He was also a friend of Sir John A. MacDonald and this friendship saw the families work together in building the new dominion and its systems of governance. Samuel Merrill Junior married Mary Edwards Hall and they had eleven children.

Edwards Merrill was born in 1842 as the eighth child of Samuel Junior and Mary. He was named after the famous philosopher and theologian Jonathan Edwards, a relative on his mother’s side. He was admitted as an attorney in Picton in 1865 and called to the bar in 1867. In 1866 he married Carolyn Wright of Napanee and they had four children: Helen (b. 1866), Edward (b. 1869), Anne (b. 1871) and Carrie (b. 1884). Edwards was the first magistrate of Prince Edward and in 1891 became the County Court Judge of Prince Edward. Having suffered from sclerosis for some time, Edwards Merrill turned down a boating excursion invitation from the Orange Order of Picton citing the excuse he was suffering from his old friend the grippe. He died the following day on the 13th of June, 1905. After the death of Edwards, Carolyn Merrill moved to 4 Prince Arthur Avenue, Toronto to live with her children Edward and Anne. In 1921 she is listed in The Torontonian Society Blue Book as receiving on Fridays.

It can be concluded that Edwards Merrill and his family made a significant and positive impact on the direction of Canadian society. It is recorded that both as a citizen, and as a man of the law, Merrill was a progressive and modern force: a promoter of justice; an active opponent of capital punishment; and a “freethinker”, meaning he did not accept religion and its prejudices as his Protestant society indoctrinated its members to do.

"As a lawyer, Mr. Merrill is regarded as a sound counsel, and a rising man in his profession; while, as a gentleman, he commands the respect of all who have the pleasure of his acquaintance.”​ 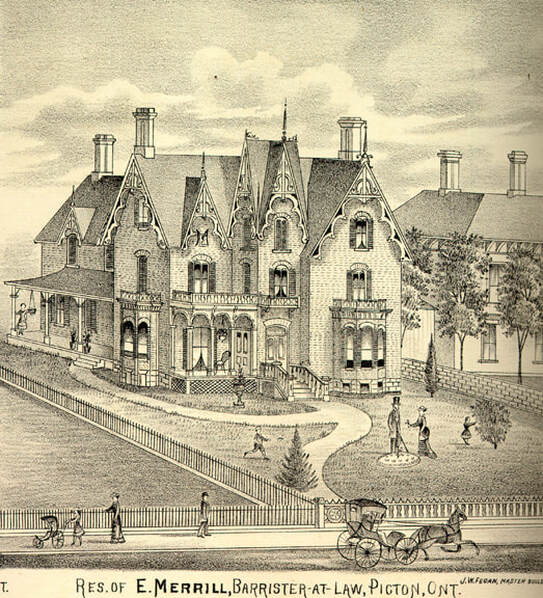 Edwards Merrill purchased a one-acre lot from the Washburn family for $750 in November of 1877. He then commissioned Master Builder J. W. Fegan to build him a Gothic Revival house in red brick. The result is a playful masterpiece featuring extensive bargeboard trim, slender chimneys and 13 gables with a tower to offset the general massiveness of the building. The house was completed in 1878 and listed in Belden’s Atlas. Edwards Merrill later commissioned a miniature version of Merrill House at 2 Hill Street, Picton overlooking the harbour. Upon its completion, he sold Merrill House for $4,600 to Peter and George McKenzie and moved into the smaller house where he remained until his death.

Since then, Merrill House has led many different lives. In 1982 it was converted into a country inn and it operated as such until 2018 when it was purchased by its current owner, Jordan Martin de Rosales. Jordan, originally from neighbouring Hastings County, moved to Merrill House from London, UK in June of 2018. Jordan was educated in Canada, Finland and the UK and holds degrees in commerce and luxury brand management. He has worked in marketing, brand management and luxury hospitality in London, Dubai, and Southern and West Africa. Having worked with both the Jumeirah Group and Grange Hotel Group, Jordan brings an understanding of global luxury hospitality to Prince Edward County. Beyond his career experience, Jordan has brought his passions for interior design, art, history and wine to Merrill House. He has studied the history of British architecture at Oxford and developed his understanding of the world through extensive travels.

Jordan completed a major restoration of Merrill House in 2019, acting as the head interior designer. From landscaping to the installation of HVAC, from the redecoration of all the interiors to the installation of a state-of-the-art wine cellar, not a window or bathroom went without replacement. Now, Merrill House operates as a boutique luxury hotel with fine, French dining, a Wine Spectator-awarded cellar and a team of 30 dedicated staff.